The Kasilof River (nineteen miles long) is about 12 miles south of the Kenai River; it drains Tustumena Lake (25 miles long, 5 miles wide, 1000 feet deep)into Cook Inlet. About 1/3 the size of the Kenai the Kasilof is managed by the State of Alaska as a non-motorized King Salmon fishery in May, June and July, making the McKenzie drift boat dory the boat of choice for most anglers. There are primarily 2 floats on this river, one from the lake to the Sterling Hwy bridge and the second from the bridge to the estuary. The upper drift is through the Kenai National Wildlife Refuge’s wilderness area where the setting is remote, with opportunity to see the wild side of the Kenai Peninsula. The lower drift is through a more rural setting with lodges and homes along the river. Most of the King (Chinook) Salmon are caught in the lower stretch but they can be found and taken above the bridge before July 1.

The first Chinook (King) salmon run begin entering the Kasilof River in late April and by mid May are entering on every tide. These early run fish are bright and feisty and continue to enter the river until mid June. The second Chinook run is available through July when the season closes. Coho (Silver) salmon begin entering in August and continue on into September. The Sockeye (Red) salmon are what is known as a late run entering in July and early August. The Steelhead trout are typically later in August and on into September and October. 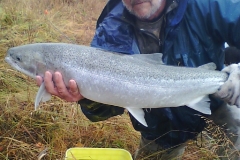 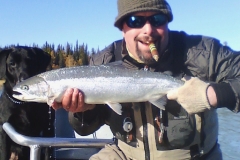 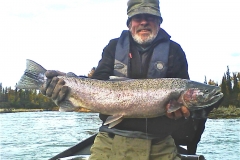